Yeah, I know that’s a bit of a crap name for a post. I did want to do something witty, didn’t quite get there. Plus, the other options were pretty bad. 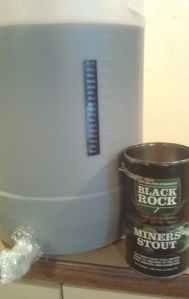 As Chas mentioned yesterday it was a busy weekend. Last if the lager was bottled. Then 5 litres of the Newcastle Brown Ale went into storage while the other 17 litres went into bottles.

There were tastings of a whole range of brews. Cider, dark ale, lager and porter. Reviews will be slowly going up over the next week out so. And then there was a brew.

I wanted to make something simple and easy. And I wanted another dark beer. When I picked up the kit for Newcastle Brown Ale I also grabbed a can of Black Rock Miners Stout. Picked up some “stout booster” as well. On some good advice I also grabbed a pack of Windsor Ale Yeast to replace the kit yeast.

Yep, some would say it’s a step backwards in home brew. But when you are running low on time, or just can’t be stuffed, a can kit does fine.

First there was the can as the base. The “stout booster” was a kilo mix of dry dark malt extract, light malt extract, and maybe dextrose. And lastly threw in the 900 grams of Dextrose, which was left over from the original Heritage Lager kit.

Had a lot of trouble with heat on this one. Didn’t really pay attention to how much boiling water went in at the start. As a result, even after for trays of ice, we had to leave the wort cool for half an hour before pitching the yeast. The lid, with airlock, was put on to prevent infection. Overall it was a real pain in the arse. There is a good lesson in there about temperature control.

Final gravity was 1.045. I was hoping for more. That’s three brews in a row where final gravity was less than what I wanted. If I had thought about it, I would of thrown in all the rest if the sugar in the house into the wort. Probably for the best I didn’t think of that at the time. Next brew will have a lot more dry and/or liquid malt extract. Or, maybe just a lot of grain. Hrmm, there’s a thought…

The wort was more bitter than expected. But I’m pretty sure this one will be a nice, somewhat basic and somewhat light, stout.