Saturday was a bottling day at my place. No brewing, just bottling. Was meant to be a quick one so we could get onto other things for the day.

Chas came over and, unlike the last few days at my place, there wasn’t anything major getting in the way of starting. So we quickly got stuck into bottling the 13 odd litres of the Home Brewers R&D Vic Secret. Sannitising bottles is pretty easy with the tub and bottling tree. Went  with a mix of a few bigger 500 ml bottles and a fair few 330 ml bottles. 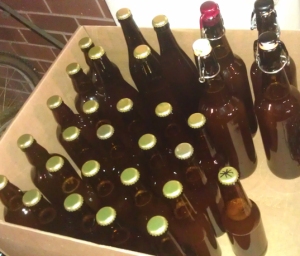 Before priming and bottling we did a gravity sample. Final gravity came in at 1.010 which means after conditioning it will be 3.4% alcohol. Not surprised as there was such a low original gravity. From tasting the gravity sample it was very hoppy and very bitter. Not sure how it will finish. I’m hoping this becomes a session beer and, if I can keep myself from drinking it all, something for the warmer months later in the year.

Before calling it a day I decided to take a gravity sample of the Pseudo Lager. Was very surprised to see it down to 1.006! I’ve been hoping it would get down to 1.005 but expected it to finish around 1.020-1.010. That’s a good result and means the beer will be 6.0% after bottling. It tasted pretty alright as well, quite dry and not a lot of hops. Should be good once it is carbonated. 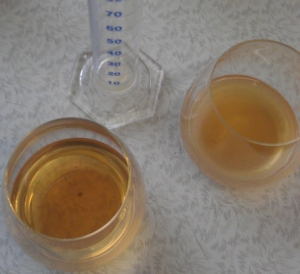 Chas wasn’t that excited about bottling another 16 litres of beer. But after a bit of negotiation, and a break for a bit, we got into it. Rather than bulk prime into the pot, we used the recently emptied fermentation vessel with the tap and a brew wand. Saved a lot of time and finished quickly.

A day of bottling. Normally nothing special, but a pleasant surprise with the Pseudo Lager. Looking forward to tasting and letting you know how it all worked out.

Since very early on home brewing I’ve wanted to make a good lager. After a bit of looking about, reading up on it and asking a few other brewers I decided to dive in.

The first attempt was as part of basic home brew kit. It was more of a very pale ale rather than a lager. The yeast was from a kit can and then it was fermented with out any temperature control. It turned out a bit rough and didn’t get much better with age.

Since that brew I wasn’t  in a rush to do another lager. Reading up on the process others use, strict temperature control and long term storage, really tuned me off. Then a fellow home brewer, Carnie Brewing, posted on his blog about his attempt and quick turn around. That got me interested again.

Pseudo Lager boiling away on the stove

Yeast was the main sticking point. I didn’t want to do a big batch in case I stuffed it. So, I decided to do a trial run with US-05 at a low temperature. Due to using ale yeast, instead of lager yeast, I’ve decided to call this Pseudo Lager. If it turns out well I’ll look at doing a bigger batch with proper lager yeast.

This was a pretty basic brew. For a quite some time I played around with the idea of splitting out the hop additions into three, but stuck with two as I wanted to highlight the Crystal hops at the end. The 5 litre boil was for 60 minutes so was able to get enough bitterness (IBUs) from the little Victoria Secret hops at the start. All the amber malt went in at the start. The malt selection was based on what was in the house. Originally I thought there was more light malt, but that wasn’t to be. Light malt was added at the end with the sugar, which was there to keep the finish dry and alcohol up. 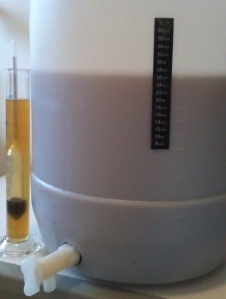 Pseudo Lager done and in the fermenter

Before the boil started I re-hydrated the yeast. I added in a little bit of light malt to try and get some yeast starter going. As this was only for about one and a half hours I’m not expecting much.

Cooling went very well. The process I’ve got to dump a lot of ice directly into the wort seams to work well. Got a bit excited and poured the whole wort in without sieving out the hops. Whoops. Then I realised as I was filling up the fermenter that I forgot the Crystal hops! Uh Oh! So, I just dumped the hops into the fermenter and continued filling it up to 16 litres. I suppose it will be something like flame out/dry hopping. Hopefully.

The gravity reading came in at 1.049 which is exactly what the recipe said it would be. Due to all the sugar in there it should ferment out to finish with a gravity of 1.005. That would be about 6% alcohol after bottling. That’s exciting for a lager.

I deliberately left this in the shed with no heating. The temperature out there drops down a fair bit. Down to maybe 10 degrees Celsius, or less, overnight. Then during the day up to a maximum of 18 degrees Celsius. I’ve left this on purpose to help keep the yeast working at a larger-like temperatures. Not sure if this will do anything other than drag out the fermentation.

After two days the beer is bubbling away. It’s very slowly doing that, but it is happening.