Bottling day, and not much more 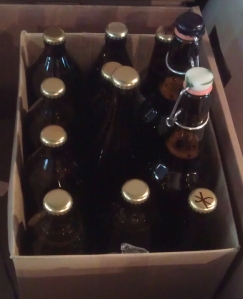 Saturday was going to be a full brew day. Due to a few different reasons the brew didn’t go ahead. Ended up being just a bottling day.

Ian was going to join, but was heading out of town. Chas got back, but still has a lot of things to sort out. And I was sick last week, so didn’t have much energy to do a brew by myself. That’s also why there wasn’t a new 101 last week. This week we should be back on track.

Ended up taking me three hours. Was a slow sort of arvo, sanitising bottles in two batches. Two slabs of stubbies and an extra 12 mixed. Total of 60. Lucky ‘cos those were my last bottles. Every single one now full of beer. Probably a good thing I didn’t do a 23L brew like planned.

Final gravity reading came in at 1.024. That means after bottling it should sit at 4.7% ABV. Not as high as I was pushing for the last few beers. That said I’m happy with this as the Mild style isn’t meant to be that strong. Flavour wise it was a mix. I was hoping that it could be enjoyed as a young beer, as the style is suppose to be. My gut feeling is that this would take more than two weeks. That’s likely due to the dark malt that was added.

On a side note, tried out a bottle of the Baltic Porter #1 last week. Given it was less than two weeks in the bottle I was impressed. Should be quite a good drop.