After only a week in the bottles, on Saturday 18th it was time to open the Sneaky Milky Ciders. There were three versions and from the bottling I was pretty sure that number three would be a winner for the sweet tooth drinker. I wasn’t wrong. There wasn’t a huge amount of the cider brewed, but still plenty left over afterwards.

I’ve put all three cider tastings into one review. They deserve to be rated aginst each other. The idea was to make a sweet tasting and very easy to make cider. So, without any more delay lets get into it. 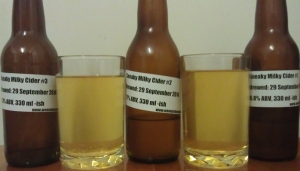 Sneaky Milky Cider 1 to 3 for review

Light fruit and sweetness in the start and some sour comes in. Quite refreshing at first.

Fills out with slightly more creaminess. Then moving to be more apple flavour before settling back into a Granny Smith apple flavour of slight sourness. Finishes with a dry and hint of tart taste.

Overall I’d classify this one as a dry cider.

Has more of a nondescript apple aroma. It’s slightly sweet  but nothing much either way.

First very light flavours. Hints of apple and sweet. Then the apple sweetness picks up. It becomes a bit like a fake sweet apple flavour you find in lollies. Verging on sickly sweet and still not quite tasting like real apple.

There is some slight filling out of the cider. But not much, leaving an empty feeling to it. Ends sweet, but also very dry. My mouth is confused. The front says sweet and the back of my mouth is desperate for water.

Along the way there is plenty of sweetness. Once that’s gone there isn’t much too this. This makes you want to drink some more, just to have something. But that’s where the real problem lies. At 7.2% this is going to mess you up, quickly.

A much sweeter aroma than the other two.

Starts as a soft light sweet apple taste. Then a full apple flavour builds. More sweetness and the apple flavour stays with you right to the end. Feels like there’s some good body to this.

Really enjoyable, at least compared to the other two. Plenty of flavour and easy to drink the whole way though. Overall I’d classify this as a sweet cider. Sweet tasting and sweet brewing.

The winner is clearly number three. Is it the yeast flavours? Or is it that the yeast didn’t eat through all the sugars? Does it matter? Not really. But I think it’s more to do with the former, rather than the latter. Will more be made? Absolutely. Next time I’ll take the lactose up a level and see what happens.