A few months back in February I made the Sneaky Cider. Once I tasted it I knew this was something to revisit. It was easy, quick and nice enough. Nothing amazing but great vale on effort put in.

The biggest issue with the cider was the dryness. All the sugar in the apple juice was used up by the yeast, all converted to alcohol. That’s good if you want a strong cider, and you don’t want sweetness. Problem is, most people want cider to be sweet. Hence this being an issue.

I have been thinking how to overcome this issue for a while. The big companies, and even smaller commercial brewers, trend to put sugar or fresh apple juice back in. That’s fine if you can (1) remove all the yeast and (2) keep the carbonation or force carbonate. On a small home brew scale that’s not so easy.

Looking for alternative options to sweeten the cider, there are a few. Some range from easy to complex with quite a number tried and failed. But before looking up all these options I had thought of using what I use for beer. Lactose sugar. Yep, milk sugar.

Lactose is used in stouts as it gives both sweetness and helps with the creaminess. The creamy flavour mouth feel is not something you really associate with cider. But I’m hoping it’s either subtle or non offensive. Preferably both.

So, on Monday night I made Sneaky Milky Cider 1, 2 and 3. All use the basic 2 litres of apple juice and have sugar added to them. Details below. 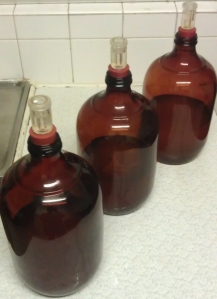 Sneaky Milky Cider 1 to 3 in the carboys

Amounts of sugar are based on what the original Sneaky Cider was. I’m not sure if there’s too much, or not enough lactose. Also, there was a bit more than two litres of juice in each bottle. About 200ml more. That shouldn’t make any difference to the final product.

You’ll see that I’ve used US-04 yeast in one. This is an ale yeast, but it should ferment clean enough. The reason for using this is to see if it won’t convert all the apple sugars. As the alcohol gets higher the yeast should slow down or even die. This would then leave some unfermented sugar, and the cider would be sweeter. We’ll wait and see.