Apples and milk, in bottles

It’s not really milk that went into the apple cider. I simply like the idea that lactose sugar is milk sugar, and therefore milk. The important thing is that the Sneaky Milky Cider has been bottled. Plus the samples tasted pretty good.

On Saturday evening I got busy and bottling. There are three batches across three carboys. Each had a splash over two litres in them. These were some very small batches, the smallest I’ve ever done. Used the auto syphon again which works pretty well. Manually priming each bottle wasn’t a huge pain as the batch sizes were small, plus I used a few 500 ml bottles which sped things up. 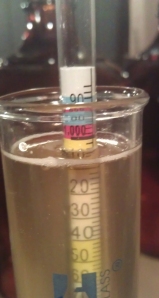 After gravity readings were done it was tasting time. The first batch had a nice sweet and apple flavour. There was also a hint of sour to this, but wasn’t overpowering or distracting. The second batch had similar characteristics but cleaner. That said, the sourness was more pronounced and it wasn’t as sweet as batch one. The last batch was noticeably different. It had a bigger mouth feel and overall rounder flavour. As a result this batch didn’t have the same noticeably sweetness or apple flavour. 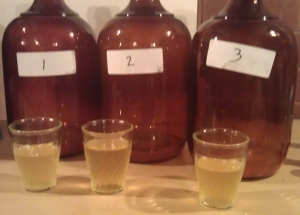 Sneaky Milky Cider 1 to 3 for tasting

These ciders are only going to be bottle conditioned for a week before most of them are consumed. They will be the sweet cider option for those not drinking beer at a party this Saturday. The beer on offer will be the Pale Trial beers, 1 to 5 of both Eine and Zwie. I’m looking forward to hearing feedback on all of them. And I how that there’s enough to go around.