Exactly two weeks ago I made another cider. Yeah, I know I’ve been complaining that I haven’t done a beer for a while and then I go make a cider! This was a little experiment in keeping something cool enough over summer months. While it hasn’t really been that hot, or even warm, things have gone well.

The cider itself is a real basic one. One litre of apple juice and 1.4 litres of apple & pear juice. Added in sugar, yeast and yeast nutrient. Whole thing done in about 10-15 mins. To speed up the process I used the blender to mix sugar into juice, one litre at a time. As there’s no boil everything has to be sanitised, including the blender.

Learning from the mistakes of the last cider attempt, I kept sugar levels low. Worked out being only 20 grams per litre rather than the 120 grams per litre or 200 grams per litre of the last attempts. This should help in two ways. First it will keep the alcohol levels down to something considered normal. Second there shouldn’t be anywhere near as much left over sugar which will keep the sweetness down. It’s the second if theses that I’m really interested in. Last time it was undrinkable when first sampled. Then only just drinkable when it was done, but not for everyone. 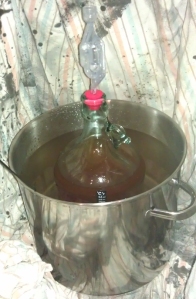 Sneaky Cider #1, in the carboy, in the water, in the pot

The really exciting part of the cider isn’t the recipe or how it might turn out. No, the real thing is the makeshift cooling set up. I’ve got my new big pot with water then put the carboy into it. The water goes up to about the same hight as the liquid in the carboy which means it works as insulation. That’s pretty sweet. But the best part is that I can drop ice packs into the water to chill the water back down, like during the day. And that’s what I did. For about a week and a bit I dropped 2-4 ice packs into the water every day. Well, nearly every day. The result was that the temperature ranged from about 17 degrees Celsius up to about 19 degrees Celsius. Not great control but, still good.

Now just gone two weeks I’m leaving the whole thing to do it’s thing before bottling this weekend. I’m half hoping as it gets warmer it encourages the last of the yeast to kick in or drop out. Not really sure how that stuff works, even after over a year of mucking around with the stuff. Then I’ll give it two weeks before we try and let you know how it turns out.