Wired for fun, and heat

First up; wow, sorry, um… and ta-da! This post has been sitting as a draft for months! I’ve finally sat down tidied it up, added in the photos and sent it out to the wide world. So with that, onto the post… 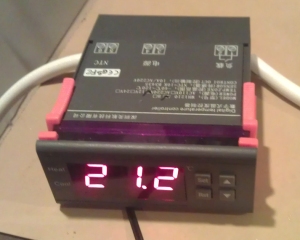 Back in April last year I bit the bullet and bought a temperature controller. I picked it up on eBay for around $10 and a few weeks later it came in the post. It’s quite a small unit with a simple interface. The instructions are basic and just a single A4 sheet covers everything. And that’s where things stop being fun. 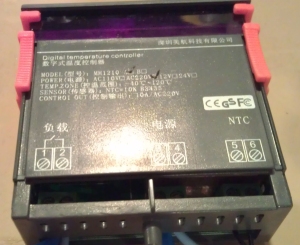 The top back end of the Temperature Control unit

The wiring diagram is only a slight step up from incomprehensible with everything in Chinese as well as on the unit itself. Google searches for wiring diagrams on the exact same unit name/number were no use. Trying to find similar units was the first real starting point. Comparing what others had done with similar-ish units gave me an overview if what the wiring structure should be. Then it was a mater of throwing in words like “positive”, “negative”, “current”, “live” and the like into Google translate to work out the right way to wire the unit. Ended up Googling terms like “Chinese character for Positive” to confirm. After all that the unit finally got wired. 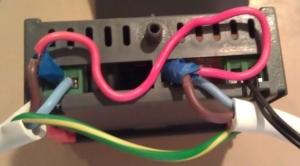 Back of the Temperature Control unit all wired up and ready to work.

Plugged it on and turned on the mains. Let’s just say that it wasn’t wired right the first time, and move on. An not one word about who wire it… A bit more time on Google and everything was sussed. Turned on and worked fine. There is a sensor on a wire which measures the temperature. My original idea was that this would be dropped directly into the wort. Then after a few discussions with fellow home brewers I decided to take their advice and put it on the side. 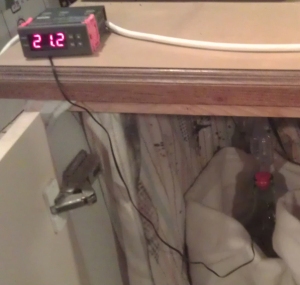 Temperature Control unit set up with carboy and heating blanket.

The unit works by having a set temperature. Then there is a range, or threshold, above and below. Once the actual temperature is beyond that temperature range it turns on the power to the “thing”. This can be for heating or cooling depending on what device is attached. If you plug in a heater and have the unit set to heat then once it’s below the set temperature the heater turns on. Neat. This can be done for cooling as well. The temperature control has a minimum plus/minus range of one degrees Celsius. What that means is when I set the temperature at 21°C it can drop as low as 20.1°C before the heating kicks in. And in theory it could get up to 21.9°C before turning off, but in reality it doesn’t go that high. So, the unit has a bit of flux which isn’t ideal but also isn’t too bad.

This unit only has one switch it means it can heat or cool. It can’t do both at the same time. There are a few units out there that do both and you can find them pretty easily. I was just a bit lazy, and cheap. Plus I’m not sure when I’de need both working. But if I ever do then I might just pick up another unit. 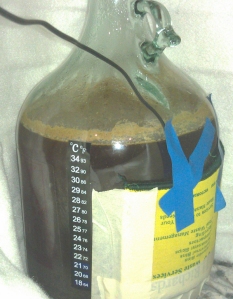 Temperature Control unit sensor on carboy. It’s under the sliced up stubby holder, which is tapped to the carboy.

Am I happy with the unit? Yes. Was it easy to get set up? No, but proper units with English instructions exits. And for those of you who are not, can’t not find, and still need to find a certified electrician… there’s units out there that don’t require wiring which do the job well and safe.

I recommend any and all home brewers who are after good flavour beer to get some kind of temperature control. It doesn’t need to be a unit like above, it might just be a cool and stable room in the house/shed. Big changes in temperature and high temperatures makes a (negative) difference to the taste of your beer.

2 thoughts on “Wired for fun, and heat”