It seams like only yesterday in put up the review for the Red Dog Pale Ale 1. And now here a we are with the second version. 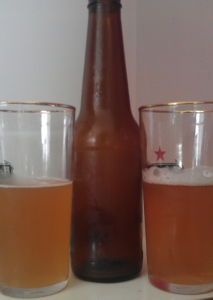 As Chas mentioned in the write up of the brew day, not everything went to plan. The main issue being that there wasn’t as much conversion of the grain to sugar as expected. The result was an original gravity lower than planned. I expected this to result in a beer that was thinner than first version, and also dryer. I was right about about one.

There’s a nice passionfruit aroma. Has hints of grapefruit and light malt as well. But that Doesn’t stay with you long. Taste wise it’s light and fruity at the front. Both grapefruit and passionfruit comes out across the length of the beer and lingers for a bit. Both drop away a bit too early. Next there the light body sitting  behind this all which helps give a slight creaminess at the back. The problem I have is that the body doesn’t hold up. As it drops out so does the flavour.

The bite and bitterness of the grapefruit is the main character here. Overall this is a really nice beer. It’s just the light body that drops off which lets the beer down. This is probably due to the issues with the grain.

For matching with food there’s a lot of options. As there isn’t a big profile here so the beer can work with a lot of foods that don’t have a really strong flavour. Chicken, fish & chips, Mexican food, most pub meals, salads and veggies, you get the idea. The beer would get overpowered quiet easily by any rich or dark food.

Despite the issues with the brew, this turned out well. Not a complex beer. This is one you can enjoy any day of the week, or have a few in a row.

Red Dog Pale Ale in glasses and ready for drinking.

I’ve had a few bottles of this lying around the house. But it wasn’t until Chas came over to help with the last brew at my place that we finally sat down for a proper taste test.

Was really impressed with the aroma. There was plenty of stone fruit aroma from the Chinook hops. Very good smelling beer.

Then onto the flavour, smooth creamy body and flavour. This is a really easy drinking pale ale. The fruit and malt flavours blend quite well without being wishy-washy. There’s a slight bitterness at the back. And, a hint of spice. Both of those don’t take anything away form the smooth creamy feel of the beer. Rather, they add some sharpness in places. Alcohol content came in at 6.9%. That’s a lot more than the beer gives away. It works to help keep the body big without punching you with that harsh alcohol taste.

Overall this is a very well built beer. There’s a mixture of clean and complex going on without being all over the shop.

Really nice beer to have with most foods. It would work great with seafood or fried food. Fish and chips would go great. Also good with fruit or salad, really anything that’s clean.

This beer was the first all grain brew we’ve done. And it turned out great. Expect a lot more all grain brews, especially from Chas.