So, after a fair amount of time, we managed to try Mikey’s Not Beers. These were un-hopped “beers” that Mikey was experimenting with fermenting in some plastic bottles.

As Mikey mentions in his original post, technically these are not beers, which, I guess, is where they get the name. Mikey’s wife tends to like maltier beers, so we wanted to see how she would like something that was quite literally all malt and not hops!

Well, we got some back luck with both the bottles and they both turned out very very sour. It’s surprising that both bottles got the same contamination, but it’s possible the bottle caps, being stored in the same place, shared some bugs. With that, hops act as a natural preservative and the lack of them would not have helped in killing off the nasties.

Not Beer with Dark Malt 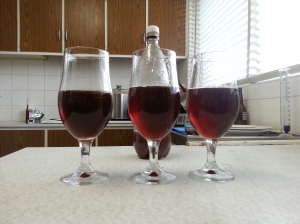 As a sour, it almost worked.

Some malt remained in the aroma, and also had a sour element. This actually worked together OK.

In the taste, the sour punch came through in the middle and drops away quickly. There wasn’t a lot of body in the beer so there wasn’t much else to grab onto. It’s not too sour/extreme, and, if it was served extremely cold, it would almost be bearable.

Still, I didn’t get all the way through it.

Not Beer with Amber Malt

As the malt here was lighter, there’s even less body and malt to cancel out any of the sour and unfortunately this beer wasn’t remotely drinkable.

According to Mikey though “if you don’t let your smell senses work at all, it’s not that bad…”

I’ll have to take his word for it.

Was very keen to get this write up done early. And now it’s Thursday. Oh well.

Saturday was a funny sort of brew day. Had the Australia Pale Ale #4 to bottle and another 4 litre batch to produce. Then there were the not-beers, I’ll get to that later. Unfortunately there was no Chas. My good mate Ian stepped in again to help. That’s two brew days in a row, after not getting him over for the whole of last year!

Before any brewing or bottling a supply run was required. I headed around to Ian’s place. Then, after a coffee and breakfast, we headed off to Grain and Grape in Yarraville. I’ve been wanting to go to Grain and Grape for a while. For home brewers in Melbourne it’s a sort of institution, party because they’ve been around for ages, partly because they’re dirt cheap, and partly because it’s a bit odd. The place is small. Really small. And packed to the brim with stuff. Lots of equipment. And quite a few odd characters both in front and behind the counter. My only piece of advice, don’t go on Saturday unless you absolutely have to. It’s packed on Saturdays.

After leaving Grain and Grape we dropped some stuff at Ian’s place. Then I realised I didn’t pick up any speciality grains. So we went to Cellar Plus. It’s just north of the Vic Market. A lot more laid back place than Grain and Grape. Staff don’t know much about home brewing and the range isn’t the best. But you can pick up essential supplied, like the Crystal grain I was after.

Once done with supplies it was back to my place. First order of business was working out what to brew. Yep, left this one a bit late. Brew for the day was going to be one of three options; the next pale ale, an amber ale or an IPA. Ian was a last minute ‘yes’ to help out. If he was coming it would be something a bit more complex. If he wasn’t it was going to be something very basic. So, as Ian was there to help I decided on doing an IPA with Crystal grains. Had a look in the freezer and knew I had a lot of different hops. After playing around Kit & Extract Beer Designer spreadsheet I came up with an IPA recipe. Decided on a mixture with Warrior for bitterness then Aramilo, Citra and Simco. I’ve never used the last three and looking forward to tasting these. So, here we have the Australian IPA #1.

The steeping grains was the first order of business. Into a grain bag. Then Ian crushed them by rolling them with a rolling pin. Brought two litres of water to a bit over 70°C and chucked in the grain bag. Then we left it to go bottle.

Bottling the pale ale was straight forward. Another bulk priming job from carboy to the small fermenter with sugar then using the tap to bottle. Nearly got this process down pat.

The gravity for the Australia Pale Ale #4 came in at 1.011. I was expecting a low reading if the original reading was right. But it came in a bit too high. I’m even more convinced that the original reading was wrong. Anyway, from the readings I have this should be 4.0% after bottling. It had a very pronounced grapefruit bitterness and dryness. Going to be interesting to see how this one turns out.

Once bottling was done it was back to the brew kitchen. The grains had sat for more than the thirty minutes, but that didn’t matter. An extra litre if water went in and we brought it up to a boil. About a third of the dry malt went in. After the hot break the fist hops. Next hops 15 mins later. Rest of malt went in with 5 mins to go. Then final hops at flame out. Not trying the “no flavour hops” method, yet. 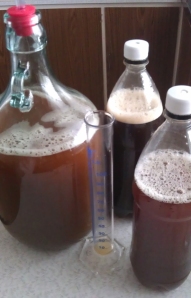 Australian IPA #1 and the two not-beers ready to ferment

Chilling went very well. The two litres of half frozen ice and just over half a tray of ice cubes went straight into the pot. The pot also sat in the ice bath to help further. When it came to getting the wort into the carboy I tried something extra. Used a muslin bag for extra filtering. Put this at the bottom of the funnel. So, pot into sieve on funnel in muslin bag in carboy. Should have got a photo.

Shook up the carboy before taking a gravity reading. Was a respectable 1.058, just shy of target. Yeast was pitched, yeast nutrient put in, carboy given another shake, and airlock put on. First brew done.

Onto the non-beers! Let me give you some context. My wife loves malty beers and doesn’t like hoppy beers. The question was raised “could you make a beer without hops?” Well, you could technically make a brew without hops. Not sure if you would still call it a beer. Not sure if it would taste any good. Anyway, I decided to make two very small batches of no hop beer. 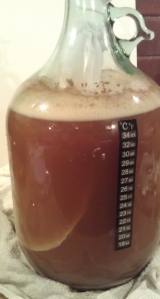 Australian IPA #1 after three days with the hop bag

Second batch was done with dry dark malt extract. Both were about 1.2 litres. Both went into soft drink bottles with Pat Mack’s Home Brewing Caps. Perfect set up for these super small experiments. After fermentation I’ll put these in glass bottles to condition.

After three days I went back to the Australian IPA. Time to dry hop. Was planning a 4 grams addition of Amarillo and Citra with a 50/50 split . Worked out a lot closer to 4 grams Amarillo and 3 grams Citra. Whoops. Hope that’s not too much. Ah well, I can just leave it a month to settle before drinking a bottle.

Was quite a good day. Great to have Ian around again. Glad to do a brew with some grains again. And happy to get the not-beers fermenting, even if I’m dreading what they’ll taste like. Talking of taste, the wort for the IPA was very hoppy and undrinkable. Good a sign. Will let you know how that one develops.