I couldn’t let December go by without doing a brew. So, decided to brew up a nice dry light body pale ale. Really simple and really easy. Knocked it over in about an hour.

After the Summer Ale turned out to be bigger than expected, I wanted to go basic. The best option was a simple malt base, simple hops and simple yeast. I deliberately aimed for something that would be dry and low in flavour. Welcome the Extra Pale Ale. In theory this will be the Summer beer that the Summer Ale wasn’t.

The original gravity came in at 1.069 which is a fair bit higher than the 1.059 calculated. Most likely due to loss of water / not adding enough water at the end. That doesn’t worry me.

The colour turned out a lot closer to what I wanted than the Summer Ale did. Very light straw colour. Hope it thins out a bit more. Will be fine if there’s very little body in this. 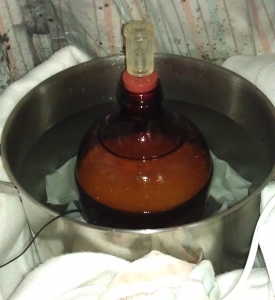 The sample tasted pretty good. Yep, there was a lot of sugar in there but that doesn’t take anything away from the yummy Amarillo flavours. IBU should be around 16 which should help make this drinkable. I have seen a few of my beers turn out a lot bitter than planned. I’m hoping I’ve gone low enough on this one.

Big challenge now is keeping it cool. The carboy is sitting in water and the next couple days I can keep replacing ice packs in there. Fingers crossed. Will find out in the New Year.