Leave a comment
By Brew in Review Home brew reviews

Mikey and I were quite excited to try Brewsmith’s new recipe, the Aussie Wattle Pale Ale that we made a few weeks ago.  This was a new recipe of theirs, and we usually like what we get out of a Brewsmith kit, so we were expecting something good.  All in all, we weren’t disappointed.

The smell was pretty malty with a hint of citrus, and the wattle really came out. 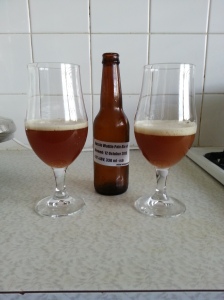 Because of the smell, I was expecting a much maltier beer, but it was actually quite bitter, more bitter than I anticipated from the style and the initial sniff.  Of course it wasn’t an IPA bitterness, but there was definitely a hoppy kick.  The wattle remained obvious throughout the taste.  Wattle is a hard taste to describe to those who haven’t had it… I tried to find some tasting notes for wattle seed in general but I didn’t agree with any of the descriptions!  All I can say is that it interacted well with the hops and the two flavours work together well.

The bitterness tended to build up a little bit, which is more typical of an IPA.  This wasn’t unwelcome or over the top and went well: really it was just a regular pale ale that happened to be on the more bitter side of things.  Other than the bitterness, the body and flavour was very typical of the style.

The only real criticism I have is that there wasn’t much finish to the beer.  I prefer a beer with a long flavour and this one was a little short; it lacked complexity.  This added to the sessionability of the beer as it made for very easy drinking, so that’s a plus.

Most basically, this was a good, easy drinking beer.  I’d do this with something just as basic and standard like a sausage sizzle or a burger.  Enjoy.