Back brewing, finally. Last brew was in January and ran out over two months ago. After over 18 weeks, it was time to brew again. That’s exactly what I did a couple weeks ago on a quite Thursday night.

I could rattle off the big list of reasons why I haven’t brewed for so long. But let me simply say: we started looking for our first home, bought a place, moved and settled in. Like all change it takes a bit to get use to.

Hops ready for measuring before going into the Lazy House Ale

Knowing that I have no home brew, and wanting to put something on for the housewarming, a brew needed to happen sooner than later. All the same there wasn’t a lot of free time. So I came up with a simple and quick extract brew for 12 litres. The idea was to make a low hopped beer that was easy to drink. I didn’t have a huge amount of time and also tried to finish off a few ingredients that had been around a while. Lazy House Ale #1: 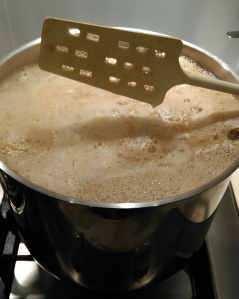 I was meant to dumped the liquid malt into the fermenter and the hot wort at the same time. But, by default, I started chilling the wort straight after the boil. As a result when I put the liquid malt in later it didn’t dissolve as intended. That meant I didn’t get a realistic gravity reading. Original Gravity only came in at 1.022 but was calculated as 1.048. I’ll be using calculated OG for the purpose of calculating final alcohol, even though I rarely hit calculated OG.

Add this was a bit of a finish-off-what-I-have-brew things were changing right up to brewing. The amount of Citra hops was more than I would have liked. I thought I might get away with it… until I tasted the sample. A fair bit hoppier than I was aiming for. We’ll wait and see how it balances out.

It’s been over two weeks since brew day. Going to bottle tomorrow. Then onto more brewing. A dark beer is needed so it can be aged and appreciated during winter. A two litre apple cider is required. The next “not-beer” really needs to be done. I’m going to be busy.