Gift of the Dad, the clean

I mentioned last week about some home brew equipment I got from my dad. A pretty good hall of equipment, some ingredients and some print stuff. The equipment was filthy.

The whole lot had been stored in the cellar. It’s really dusty down there. Over the years dust had built up, and caked on. Plus, it looked like there was sediment from the last wine made. And that was many years ago. This was going to be a tough cleaning job.

Lucky a few weeks ago I picked up some Oxyper. It’s a strong cleaning agent. My mate Michael had recommended it to me as an alternative to PBW, a more well known powerful cleaning agent. Both are good for removing gunk and stuff from your brew equipment even when you let stuff dry on, everyone does it at some point. 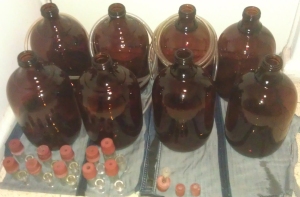 Given the size of the carboys and amount of build up I wanted to soak as much as possible. That meant filling the laundry trough with 20 litres of water and 14 teaspoons of Oxyper. This wasn’t done one, or twice, but three times! The new bottling brushes came in quite handy. I was surprised with how much crud came out of the equipment. And, I was just as impressed on how clean I could get this stuff. There’s no proper ‘before’ shot to compare to the clean carboys.

The airlocks only had build-up on the rubber bung. Didn’t try to get the airlocks out of the bungs as I’m not sure how old it all really is. Plus I don’t want to break anything.

The tubing was tricky. Tried a mixture of soaking and running water through. The two wider tubes were by far the dirtier ones. It all appears to have come up well. One exception is a dark mark in one tube which I can’t seam to be able to remove. I’m going to assume it’s fine. If it hasn’t come out yet it shouldn’t when I brew.

And that’s a nice lead into the brewing I’ll be doing. But, that’s for another day.