As you might remember, when Chas returned from his trip overseas we had a brew day at his place. Not sure what to brew he picked up a kit of the Mangrove Jack’s IPA, new yeast and a booster. 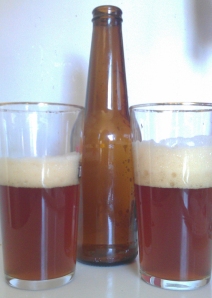 After two weeks in the bottle we tried a bottle. The beer was okay but still quite rough, even in the middle. The flavours were there but it wasn’t working all together. We decided to give it another week and try again. Over the weekend we did exactly that.

First up is the soft spice hop aroma. Very slight sweetness at the end. A fair amount of fruit aroma which is what you would hope and want from the style.

Taste up front is refreshing and light. Bit of stone fruit and grassy flavors are there. The bitterness picks up slowly and builds most of the way through. Around the middle the body drops away a bit. The beer gets dry and slightly tart. There’s a slight metallic flavour that comes in. This last part is the least enjoyable bit of the beer.

As the beer warms a little it becomes more balanced. The fruit flavors become more pronounced. The metallic flavour drops away to just be at the end. This makes the beer a lot eater to drink and enjoy.

Overall this is quite good for an off the shelf kit. Taste is good, body is alright and the finish is okay.

The booster really helped this beer. Extra dry malt was really needed here.The replacement yeast and extra Cascade hops also helped. Interestingly this beer only came in at 4% alcohol. That’s below what you would expect for the style, this should be 5.5% or higher. That said, it doesn’t really make much difference to the beer flavour or feel.

Food wise, this could work with a few things. Would work with anything with meat and sauce/marinated. That can including seafood all the way through to stake. The fruit side of the beer would play nicely. The meat should help sideline the slight dry tart metallic elements of the beer.

This is a good beer. It’s hard to work out what caused the elements I don’t like. Maybe it’s the base kit, maybe the fermentation or yeast. Really anything. That said, would be happy to return to this and brew again.